The Gran Sasso knitwear company has always carried out meticulous research for the best locations, faces and photographers whose job it was to best express the company philosophy, the collections and the Made in Italy expression. Second generation Brand Managers Guido and Carlo Di Stefano, present in the company now, have been hard at work since the early 90’s researching the style that is characteristic of the catalogues and the curation of all the aspects connected to the shoots. Their first study journey specific to the presentation of a catalogue was in Milan. The 90’s was a period of great success for Italy, the football world cup is hosted, which will be a driving force for the growth of main Italian cities both aesthetically and industrially. Style icons such as Giorgio Armani and Valentino create scenographic shows among the most beautiful of the decade and welcome the applause of the "fashion addicted" public. 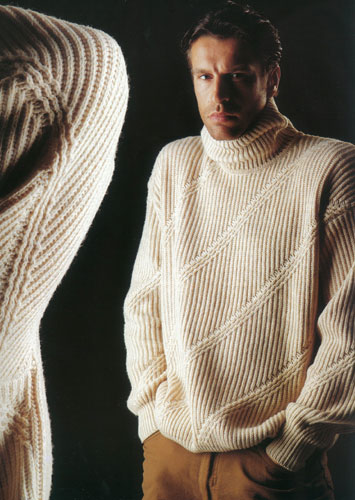 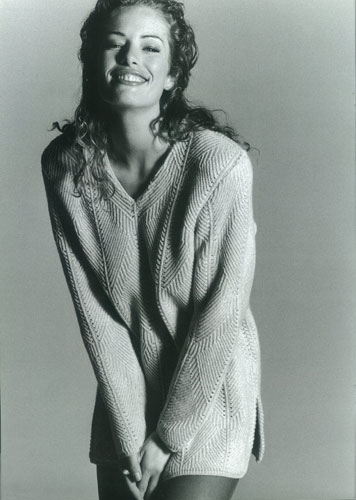 In the world of fashion all the desire for change of those times is poured out, the choice of colour palettes moves towards brighter shades. This period is remembered for the inspiration aimed at change and transformation, a new way of approaching style. 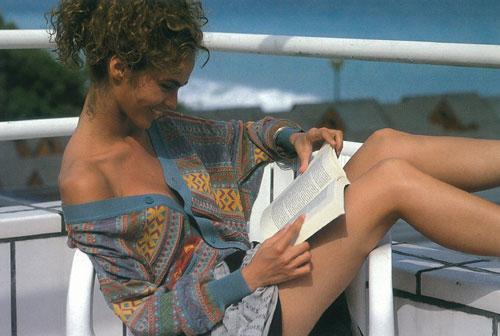 In this decade there is a sense of freedom in showing your body, these cultural practices are also reflected in the photo shoots. Let's look at these images of the expressive Natasha Stefanenko, with her shirt tied and her belly uncovered, a look in vogue in the 90s. 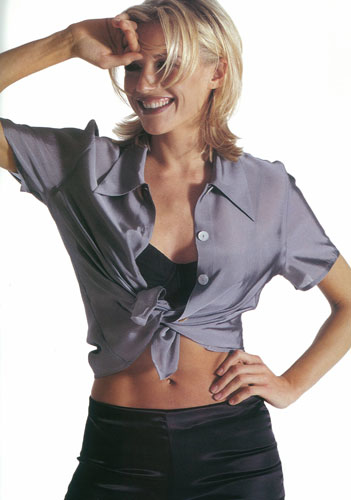 Natasha Stefanenko for Gran Sasso in 1997 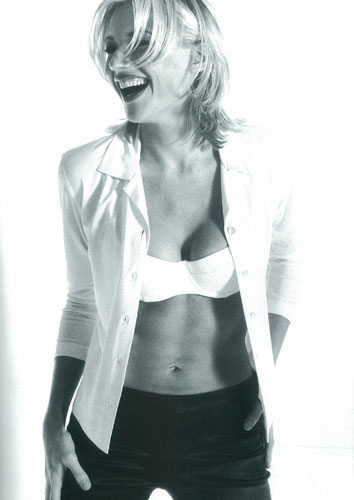 Natasha Stefanenko for Gran Sasso in 1997

Almost ten years later, for the 1999 catalogue, the Gran Sasso team, following constant research aimed at understanding the best combination of location and items presented, decides to move overseas. To be precise, to Manhattan, the protagonist of this catalogue is Tom Welling, lead actor of the “Smallville” series. In one of the photos taken we can see the "Twin Towers", which over the years have become the symbol of the tragic attack on the "World Trade Center" complex. Buildings that now evoke in the collective imagination those moments of tension experienced by all of humanity, while the shot taken two years earlier takes us back to a period of sunshine, of disregard for certain topics, of lightness. 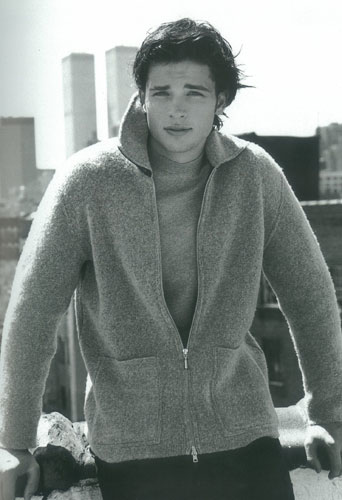 Tom Welling for Gran Sasso in 1999

In the background of another shot you can see "The Statue of Liberty", an iconic monument for the "States". Representation of autonomy in expression, linked to the concept of the catalogue: originality, suspended between elegance and practicality. 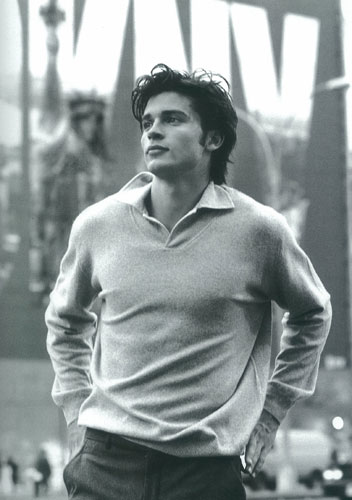 Tom Welling for Gran Sasso in 1999

Balthazar Bar is another location where some shots were taken, the most iconic brasserie in New York. It was April 1997, when this French-style brasserie opened at 80 Spring Street. The English owner Keith McNally made this place a temple where the city's best known faces often stopped, Meryl Streep, Joe DiMaggio and Lauren Bacall are just a few. 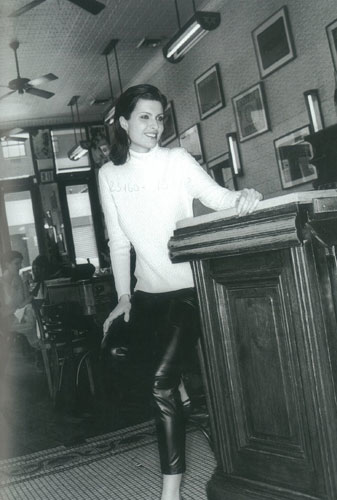 The photographer in charge of this shoot is Bob Krieger. He is described by the press as being refined, cosmopolitan, casual on set. His vision on portraits: “An act of mutual seduction. Which, when it succeeds, creates between those who photograph and those who are photographed an affectionate current made up of trust, esteem and sympathy, which does not fade over time." 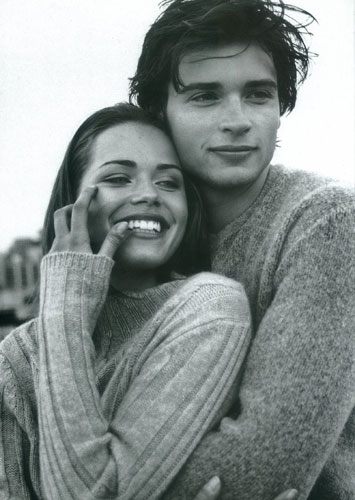 Amongst the male and female faces that are protagonists of the catalogues between the 90’s and 2000 we can see Sergio Múñiz, Barbara Snellenburg, Paola Saluzzi and Aída Yéspica. 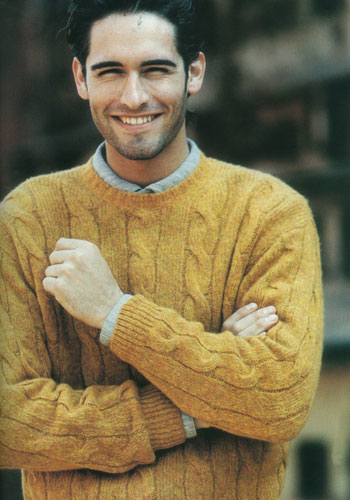 Sergio Múñiz for Gran Sasso in 1997 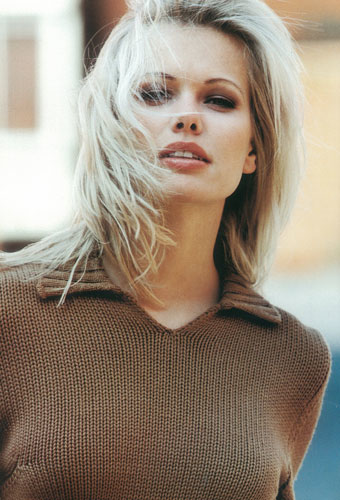 Barbara Snellenburg for Gran Sasso in 1997 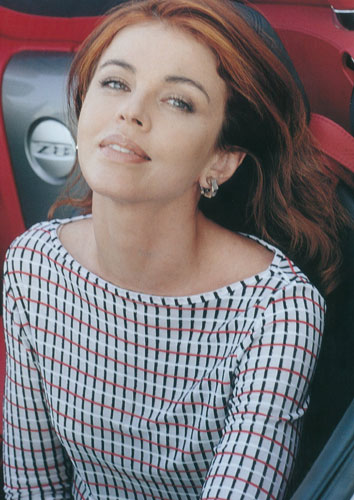 Paola Saluzzi for Gran Sasso in 2002 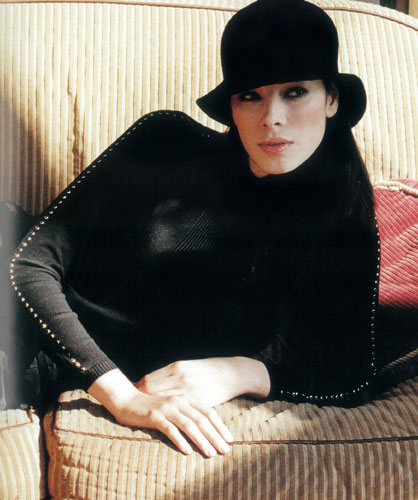 Aída Yéspica for Gran Sasso in 2003

Photography arises from the need to immortalize a moment, for fashion it represents the possibility to generate an archive of tastes and styles. Over the years it has allowed the quality and wearability of Gran Sasso products to be raised through an artistic touch.